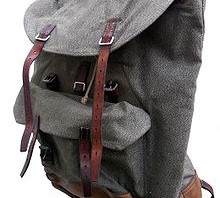 So my son, a fifth grader, is going on an overnight school field trip to ONSC (Ozark Natural Science Center) tomorrow. While there, he’ll perform various science experiments and learn more about nature from the ONSC guides. It’s a great experience, from what I’ve heard, and after many years of service they are closing their doors after this year. So his group of fifth graders is the last group that will have this opportunity.

My son is a bit of a homebody. He’s only spent the night at friend’s houses a handful of times, and has been nervous about the trip. My wife and I both agree that it’ll be good for him to take this trip without us. Which is why I was so conflicted this morning when, in front of my son, his teacher explained that they were short one male chaperon and asked me to come along on the trip.

My son and I do all sorts of things together: we swim during the summers, play video games tog

ether, go places together, practice soccer together, and generally spend a lot of time together. He’s my son, after all, and I love to spend time with him. But I also recognize that he needs to spend time away from his parents, which is one of the various things this trip is supposed to provide. He needs this, and I probably do as well.

In addition to being a professional writer and author I’m also a substitute teacher, so I often spend a great deal of time at my son’s school. I’ve even subbed for his classes a few times, which we both enjoy. I love that he loves to spend time with me, and hope that’s always the case. But this one time, it just feels right to let him have this experience without me.

My father was not a good man, or at the least he was a man who made bad decisions. He was an abusive alcoholic who was married four time and fathered ten children. I was the last, and that’s only because the chemotherapy he went through for his cancer rendered him sterile. Had that not happened, and had he not died when I was thirteen, I’d probably have a plethora of younger half-siblings running around.

I’ve spent much of my life and almost all of life as a father asking myself what my father might have done and then doing the opposite. So far, that’s worked out for me. I always try to be patient with my son, be loving, and show him that it’s better to live a nurturing life then one of anger and fear. How, then, did he come to fear spending time without me? Is it because, in trying to be different than my father, I have held him so close, loved him so much, that I haven’t managed to help instill a sense of independence in him?

Be he is independent – sometimes fiercely so – in other ways. He’s never shy about letting his opinions and feelings be known, and he never just “goes along with the crowd.” So maybe I haven’t done such a bad job, after all.

Still, I don’t think I’m going to chaperon ONSC. My wife doesn’t think that I should, and I agree with her. He needs to fly solo this time. When I’m not subbing at his school I’m often volunteering, or coming to have lunch with him, so I am definitely a presence in his school life as well as at home. I know he’ll be disappointed with my decision, but I have to think that also, on some level, he’ll be a little relieved. It’s his chance to spread his wings, to blaze new trails, to have an experience not as a child but as a young man. It’ll be good for him. At least that’s what I keep telling myself. I just wish his teacher hadn’t asked me in front of him.

UPDATE: 1) I just found out that ONSC raised enough money to stay open! Thanks for that great piece of news, Bethany! and 2) They found another chaperon before I could officially say no. 🙂

He wished there was another way, but if there was he couldn’t quite see it. He’d need the woman’s help to set things right; he just didn’t like having to wake the dead.